The Farrell clan in action at our cousin Amanda’s wedding. As usual, Coleen is at the center of all the fun!

I’m blessed to be a part of an amazing family: The Farrell’s. My mother was one of twelve, so it’s an extensive clan. The first cousins alone number 35. Add in the spouses and various offspring and, well…I’ve never even tried for a grand total.

We cousins are a tight-knit group, despite the fact that we span 4 decades or so in age and are scattered across the country. (Well, mostly the East Coast, but a few in Texas.) It’s a pretty awesome bunch, and I feel privileged to be related to each and every one of them.

As in any family, it’s unwise to label anyone as your favorite. But I’d be remiss if I didn’t give a special shout-out to one of my all-time favorite Farrell’s today. Especially since it’s her birthday. 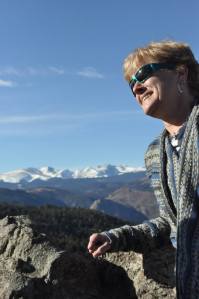 The one, the only…Coleen Farrell Coffey. (Photo cred to her incredibly talented son, Eric Coffey.)

I speak of the one, the only…Coleen Farrell Coffey.

She’s wild, crazy and more fun than I could ever dream of being. She’s also one of the kindest, most caring people you could hope to meet in your life. She possesses the biggest heart of anyone I know and is so incredibly strong. Nothing can knock her down. (And let me tell you, plenty of things have tried.) She’s an amazing daughter, sister, aunt, niece, mom, cousin and friend. I’m constantly in awe of her and I thank my lucky stars that I have the honor of being related to her. (I also think her husband, Steve Coffey, is an absolute saint!)

We’ve always had a special bond and the trials and tribulations of the last few years have only brought Coleen and I even closer. Not only is she one of my favorite cousins, but she’s also one of my best friends.

This weekend, Coleen and I will get to spend a lot of quality time together. In fact, we’re planning to stay up all night on Saturday.

No, we won’t be out celebrating her birthday. Not in a traditional sense, anyway. No, we’ll be walking with Team Chenango in the American Foundation for Suicide Prevention’s Out of the Darkness Overnight – an 18 mile dusk ‘til dawn walk to break the silence and bring the issues of depression, mental illness and suicide into the light.

When Coleen first told me that she wanted to walk with me this year, I was excited that she would be joining us. But then she told me why she felt compelled to support the cause. You see, suicide had hit close to home for her.

She told me about the 25-year-old son of one of her other cousins who took his own life earlier this year. He left behind his parents, two sisters, a long-time girlfriend and so many friends and family members – all of whom mourn his loss and struggle to understand why he chose to take his own life.

This Saturday, Coleen will walk in his memory. I know it will be an emotional experience for her, as it is for all who participate. But we’ll channel those emotions into every step we take.

For with every step, we hope to help someone who is struggling with depression get the help they need before they choose to end their own life.

With every step, we hope to prevent other families and friends from having to endure the loss of a loved one by their own hand.

With every step, we will help bring the issues of suicide and depression out of the darkness and into the light.

Since Coleen joined our team only a few weeks ago, she’s still working to meet her fundraising minimum. Will you help her get one step closer to her goal by making a donation today?

I can’t think of a better way to wish her a Happy Birthday.