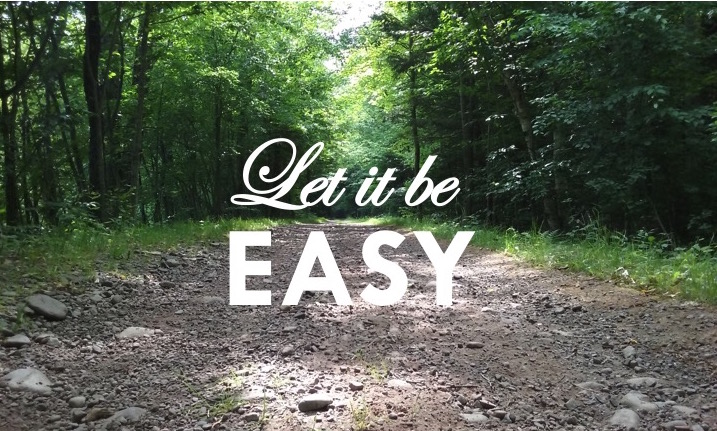 Let it be easy. That’s my mantra for today. It’s not a plea to the universe but a reminder to myself. Step out of your own way, Melissa. Stop worrying and overthinking. It doesn’t have to be hard.

I haven’t always believed that. In fact, for most of my life all I’ve needed is a single, solitary negative thought to set me off on a downward spiral. One thought compounded into twenty, all reinforcing The Awful Truth.

The world’s against me.

No one respects me.

I can’t get anything right.

I should make that a drop down menu so you can pick your own poison. Because we all have one or more of these “truths”, don’t we? That negative core belief we go back to time and time again. We just keep reinforcing it, over and over again.

But here’s the thing: Those Awful Truths aren’t actually true. And that inner voice? It can be your best friend – or at least an enthusiastic sidekick. You just have to train it to build you up rather than tear you down.

That voice inside you is a mimic. And what it’s been mimicking is the limiting beliefs you’ve internalized about yourself from the well-meaning people in your life that have been filling your head with you-can’t-you-won’t-you-shouldn’t-you’ll-never-you-have-to-do-it-this-way bladdy blah blah from practically the day you were born.

They meant well, always trying to protect you from harm. Save you from getting hurt. Prepare you. Teach you. Set you up with ‘realistic’ expectations. But what we absorb in the process is that our lives have to follow a certain pattern. It’s ok to have dreams, but you shouldn’t really expect to reach them. That’s why you need that nice, steady accounting degree to fall back on.

Do you know how to spot the people who don’t have limiting beliefs? They’re the ones out there doing what they love and absolutely killing it. They’re the ones who have determined what success means to them and are going after it.

I’m sure every one of them would tell you that, at points in their journey, people have told them that they’d never get where they wanted to go. That they’d never achieve their dreams. But you know what? They nevert believe that kind of trash talk. Because they believe in themselves.

While people are telling them that their dreams were impossible, their inner voice is saying, “You’ve got this!”

Your inner voice can do the same.

As for mine, I’ve been putting her through something of a positivity boot camp. She still tries to steer me back to those Awful (Un)Truths every so often, but I’ve discovered she’s fairly easy to distract. She’s rather partial to flowers, and absolutely loves the water. And as I’m taking in the beauty around me, it’s easy to be grateful for all the love and blessings I have in my life.

And if you’re anything like me, when you’re steeped in gratitude, reminded of my blessings, everything seems easy.

“Let it be easy” is a nugget of insight I gleaned from Notes from the Universe, a daily dose of (often humorous) inspiration and enlightenment delivered direct to your inbox from the brilliant minds at TUT.