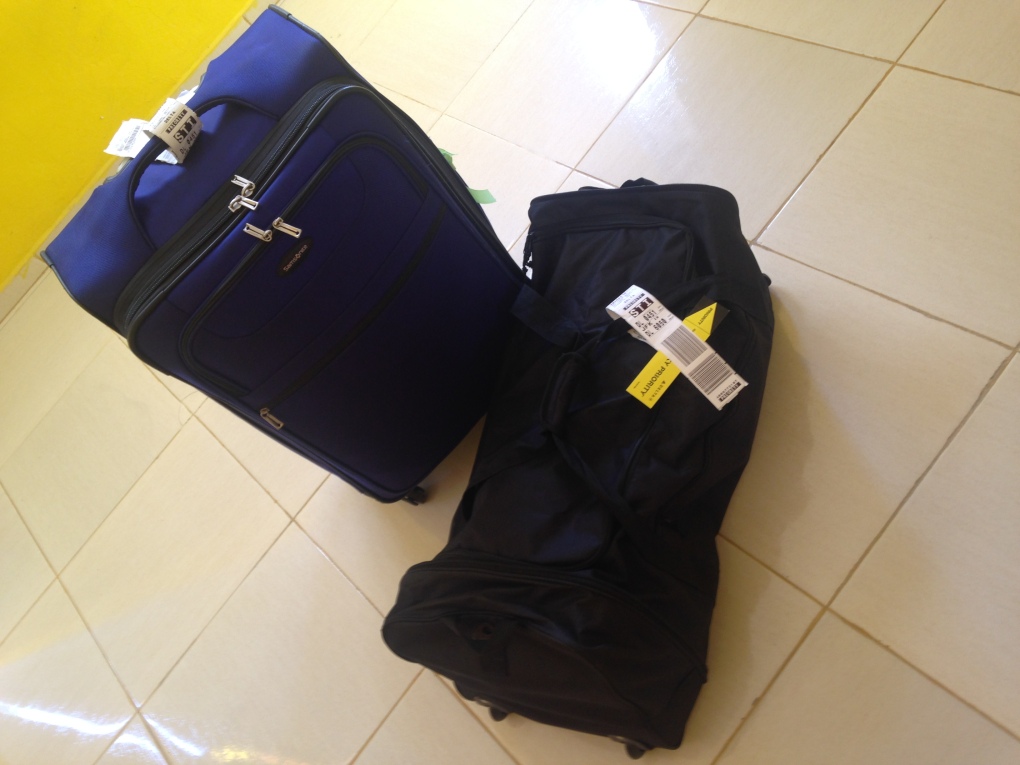 I would have a preferred a strict “No Bag Left Behind” policy, but I suppose two out of three ain’t bad…

“You can only check two bags,” the man in front of me said for the second time. Seeing my expression – and no doubt both questioning my grasp of the English language AND grateful for the counter that stood between us at this point – the airline representative repeated himself yet again. “You can only check two bags. There’s a strict embargo going into Santiago.” Perhaps I would have been better able to process this information if I hadn’t just slid all three of my to-be-checked bags to this man. The three bags I’d spent a week packing and repacking. The three bags containing everything I thought I’d need during the 3+ months of my extended stay in the Dominican Republic. The three bags which, incidentally, I’d had no trouble checking in online the second I was able to do so 23 hours 59 1/2 minutes prior to departure. I couldn’t do anything but stare. First at the man in front of me – whom I’m sure really is a very nice man and I feel horrible about the things I was thinking toward him – and then at those three beautiful bags. Because I want you to think, just for a minute, what it’s like to pack for a trip of that length. Three and a half months in another country, one with a climate completely different from your own. A country where not all of the comforts of home are readily available. And where it is nearly impossible to ship anything without considerable expense and red tape. As you can probably imagine, a great deal of angst went into that process. It seemed never ending. And it wasn’t until I zipped up the final bag that morning that I felt a sense of calm. I was even a little proud of myself, because I felt like I’d struck the perfect balance: prepared, but not ridiculously over-packed. And now this man was essentially sending me back to the drawing board with only the narrowest of windows. I could have wept right there but, frankly, I knew I couldn’t spare the time. The cut-off was quickly approaching. Would it have been different if we hadn’t hit unexpected construction on the way to the airport? Maybe. But even with more time, the task wouldn’t have been any easier. My mind was already working, trying to calculate what was in each of the (very full) bags. What did I absolutely need? What could I live without? Because I wasn’t going to waste time arguing. The important thing was ME getting on the plane, after all. And I couldn’t risk running afoul of the air-travel gods any more than I already had. “I need 2 minutes,” I announced, reaching around to pull 2 of my 3 bags to the side. (Which sounds easier than it was. Keep in mind these were two rolling duffle bags stuffed to the gills.) I unzipped both, picked the one that held the most essential items and, as quickly as I could, removed as many non-essential items as I could. A half seconds later, they were replaced with the most important things from the other bag. Or what, at that split second, I thought were the most important things. Only, of course, I wasn’t half as calm and collected about it as I’m making it sound. I was nothing short of a hot mess. Time crunch or no, I was still distinctly aware of the fact that I was the floor show for the other passengers in line. As a result, that three-month supply of feminine hygiene products I had the foresight to pack didn’t make the cut. (A decision I may very well come to regret.) What felt like 30 seconds later, heart pounding and palms sweaty, it was time to zip up the overstuffed case. In my post-adrenaline haze, I had no idea what made it in and what didn’t. And I was too shell-shocked to care. Thankfully my mother, who had so graciously offered to drive me to the airport in the first place, had insisted on coming in with me. So she was there to take possession of the poor lonely suitcase I had to leave behind.

As for me, it took the entire first leg of my trip for my nerves to quiet. But now, a few days later, I’m settling in to my home-away-from-home in my tropical paradise. And I can’t for the life of me remember what was so important in that other bag. Because, let’s be realistic: this is hardly the worst airline horror story I’ve ever heard. Heck, it’s not even MY worst airline horror story. And it’s not like I’m never going to see the contents of that bag again. All that truly matters is that I’m in this beautiful place, following a lifelong passion and living a life that still feels a bit like a dream. And if I bit of worry or angst starts to creep in, well…I have the rustle of the wind in the avocado trees, the crowing of the neighborhood roosters, a view of both the ocean and the mountains, and the gentle clatter of the keys on my keyboard to remind me just how lucky I am. Besides, this is supposed to be an adventure, right? It wouldn’t be fun if it was too easy.

Sunrise over the avocado trees on my first morning. #100DaysInParadise

3 thoughts on “Two Out Of Three Ain’t Bad: A Modern Air Travel Adventure”